He Says: Almost everyday in Malaysia we saw a government sponsored commercial promoting tourism and that commercial always ended with a ditty that will be forever seared in my brain, hence the title of this blog. Every time I hear someone say Malaysia, I can’t help but sing the tune to myself. It’s actually starting to drive me crazy. 🙂

But we have memories from Malaysia other than an annoying song. Our first stop was Kuala Lumpur, one of the biggest cities in Southeast Asia, a stark contrast to the rural towns of Bali. In place of the small family businesses, swarms of motor bikes and dirty streets there were the Petronas Towers, shopping centers and six lane interstate highways. 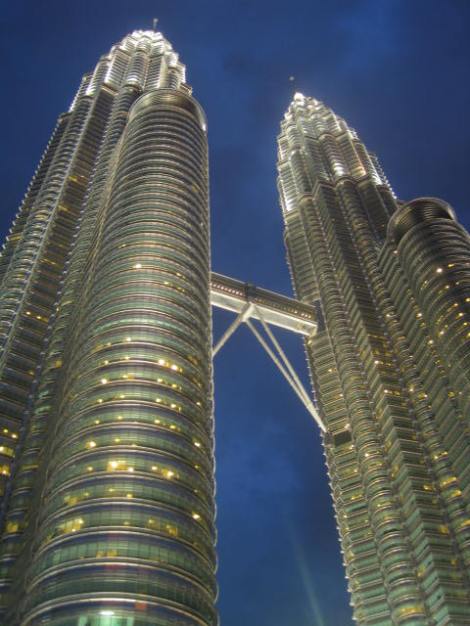 Unfortunately, the weather was just as muggy and sticky in KL but, if you knew where you were going, you could literally walk through air-conditioned malls from one side of the city to the other. Believe me, I did it.

To get a feel for the city we took a bus tour all the way around and stopped at all the major tourist spots: in Chinatown we haggled for pirated DVDs, “name-brand” clothes and cologne; at the Petronas Towers we almost fell over backwards trying to look up and take their photos; and, we took a train to the Batu Caves where we walked passed a huge golden statue and hiked up almost 300 steps to see a Hindu temple built into a mountain. When we weren’t being touristy we were enjoying the things we hadn’t enjoyed for a few months – Papa John’s pizza and Krispy Kreme donuts. 🙂 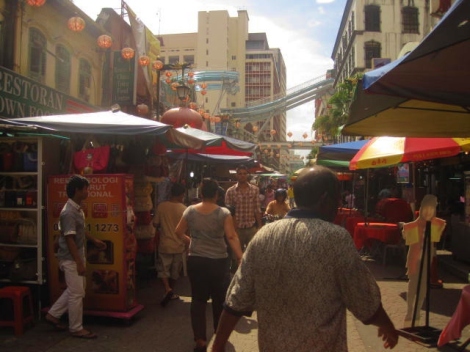 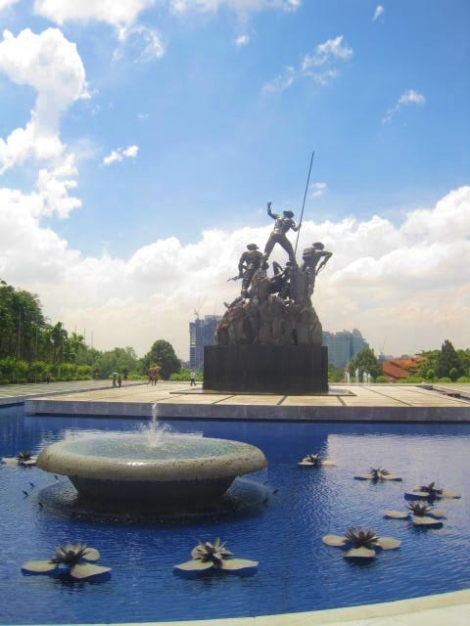 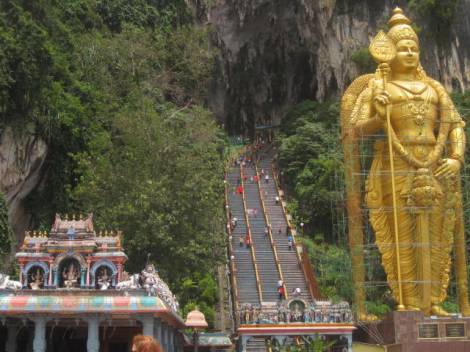 Steps up to the cave. It didn't help that it was sooo hot and humid. 😦 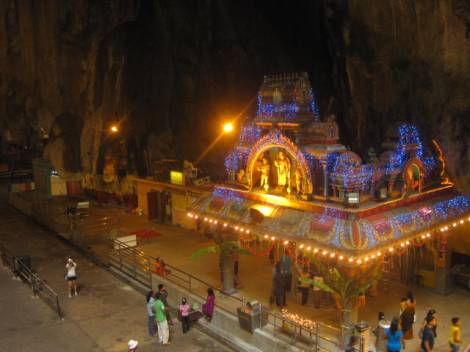 We also got the chance to meet with a friend we worked with in Afghanistan, prior to our early retirement. It was great to see her again, especially for me. You’re looking damn sexy these days, Anne. 🙂 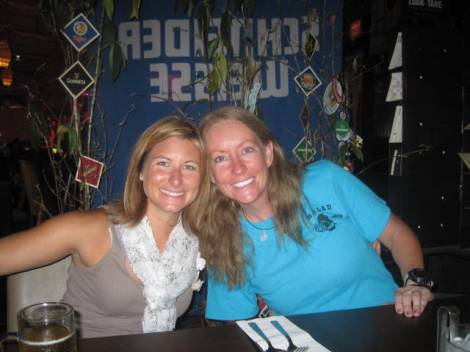 From the city we took a bus a few hours north to Cameron Highlands where the air was, thankfully, much cooler. The altitude in the highlands is something like 9,000 feet so the weather was more in tune with what TB and I enjoy. The atmosphere there was much like a small mountain town you might find in Colorado. Laid back, chill, everyone relaxed. Totally different from the hustle n’ bustle of KL.

Arriving to the cooler Cameron Highlands

The entrance to the Buddhist temple 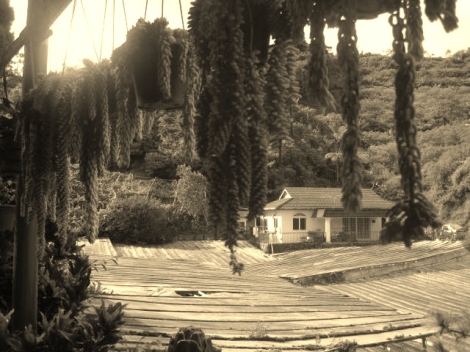 Old woman in the shoe..

While in the highlands we drove through hill after hill of tea plantations and got to taste their delicious local brews. We also stopped at a Buddhist temple for some pics then checked out a botanical garden and butterfly park.

On the tea tasting deck

I think we were both a little sad to leave the laid back atmosphere of the  highlands. After a few days we took another bus to the island of Penang but didn’t do much there other than apply for our Thai visas. Once we had those we hopped on a ferry to another island, Langkawi, just south of the border of Thailand. After a few days of drinking wine on the beach and eating dinner while we watched the sunset we took yet another ferry over the border to Thailand.

Getting on the ferry at Penang to Langkawi 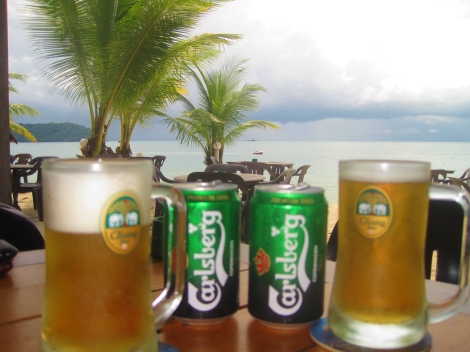 I think after New Zealand, Australia, Bali and Malaysia we’re starting to get a little “beached out”…if that’s possible.  It’s too bad we still have Thailand and the rest of SE Asia to go. 🙂

It can’t be a hard life if you’re getting sick of the beach.

She Says:  Oh the famous Malaysia jingle.  Don’t lie J, you loved it.  I catch him singing it every now and again with a smile on his face just like the girls in the commercial 🙂

KL was every girl’s dream.  A huge city filled with nothing but shopping malls and markets!  I told J that the next time I come back I am coming with girls and empty suitcases 🙂  It was nice to have all the commercial options but I think J and I have both found that we prefer the sleepy beach/mountain towns then the bustling cities.  It’s definitely a nice change of pace and its good to stock up on supplies we need, but there is just a more authentic feeling to being out in the country and away from all the tourist traps.

The best part of KL was of course seeing our friend Anne.  I let J look on this one because  he was right–she did look good!  I am pretty sure the waiter asked if we were sisters.  So thanks Anne, for a great night out with yummy food and dessert!

I really liked Cameron Highlands.  If you like good scenery, strawberries, tea, and veggies–CH is the place to be.  We had really good food there as well.  Eating all this yummy food makes me miss cooking.  I am trying to write down all the food we like so I can make it when we get back.  We might even take some cooking classes while we are in SE Asia. 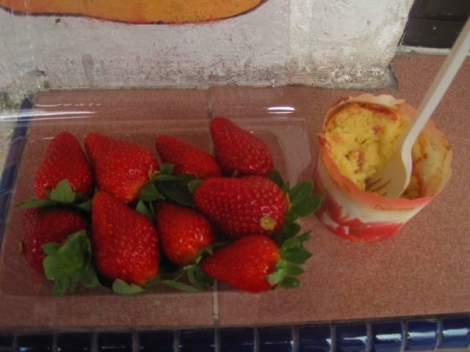 The best strawberries, and hands down the best muffin I have eaten, period. 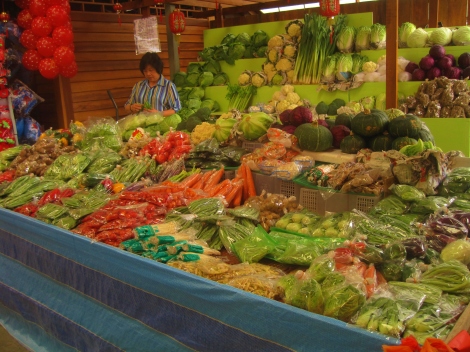 Look at those veggies!

Langkawi- Oh my experience in Langkawi… We really enjoyed this island, I will start with that.  I had a rather unexpected experience.  I had heard about Thai massages, Thai baskets (If you don’t know, don’t ask), and Thai parlors where you get a “happy ending”.  This however, was Malaysia, not Thailand, and I thought happy endings were only for the men.  Apparently I was wrong.  Although I did not get a happy ending– I received an invitation for one, which I kindly declined.  The invitation was not in the form of words either if you catch my drift.  The subtlety of this invite seemed very routine as if this sort of thing happens often or is standard practice.  Which made me wonder if it was..  I was not about to ask, but it did make me wonder.  So yeah that was an experience!  The rule of thumb is to only allow women massage therapists from here on out.

I agree with J. We are a little beached out.  Mostly because where there is a beach there is heat and we are definitely excited for some cooler weather. Hopefully after Thailand we will run into some.  Here’s hoping!