She Says:  We arrived to Sofia, Bulgaria around 8pm.  We weren’t entirely sure where our hotel was located in reference to the bus station so we opted for a taxi.  The taxi driver of course didn’t speak good English and sent us on a goose hunt all the while racking up the dollars on the meter.  We finally found our hotel after numerous stops to other taxi drivers asking for directions.  UGH I HATE TAXI DRIVERS!!  We ended up paying about $15 more than we should have but what can you do.  They pray on vulnerable tourists.

Once in the hotel the clerk informed us that they were double booked so we’d have to stay at one of their sister hotels.  We weren’t in the best of moods at the moment considering our taxi escapade.  We told her it was alright as long as we don’t have to take another taxi…so she told us that it was walkable distance and that we would be upgraded to the suite due to the inconvenience.

We walk down a couple streets and found our new hotel.  The guy lead us out of the reception room and to a building separate from the hotel. We were starting to feel a little weary about this but went along, it had been a long day.  As he was opening the door he said, “I think you will be quite satisfied here.”  The door opened and J and I’s mouths dropped!  Are you kidding me!!  We both dropped our bags in disbelief.  The apartment was beautiful.  It had 3 BRs with a modern decor, large flat screen tv, fireplace, and best of all– a huge bathtub!!  I was convinced that I needn’t see any of Sofia and I would be quite content just lounging in our suite.  This ended up being almost the case 🙂

The next day we got up, had some breakfast and went exploring.  There wasn’t a whole lot to see in Sofia.  It’s sort of a mix between old Europe and old Soviet states.  It was pretty much what you picture when you think of Eastern Europe (dreary, graffiti, small shops, and old cars).  We visited the biggest tourist attraction, The St. Alexander Nevsky Cathedral, and happened to find a cool little brewery nearby, the Mayor’s House.  We also happened to find these delicious potatoes that everyone should try when visiting Bulgaria.  They were boiled potatoes cooked in butter, garlic, and some magical ingredient.  I don’t know what the trick was, but they were absolutely to die for!  We ordered them many times while in Bulgaria. 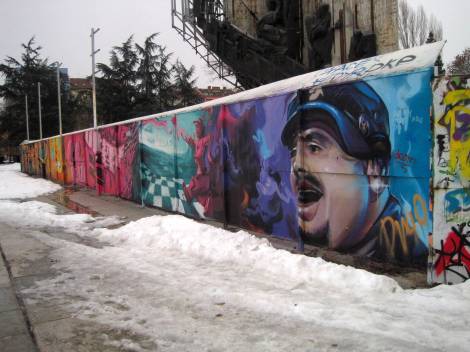 Changing of the Guard.

Our second day there was full of the same.  We trotted around the city, grabbed coffee, lunch and visited a mall.  It wasn’t much of a mall.  We had hoped to see a movie there but found out that the theater had been closed for close to 4 years.

In the end Sofia was nice but left a lot to be desired.  It seems that economically it’s growing and trying to be one of the major cities in the region, however, it may be several years before this happens. Next stop, Bansko.

He Says: Around this time last winter, TB and I went to Whistler with her wifey, Amanda, and her husband, Rudy, to play in the snow and on the glaciers of the Coast Mountains in British Columbia. Nearly one year later, when we arrived to Bankso, I was getting twitchy and shaky from lack of carving through the “pow, pow”. It’s hard for me to go that long without being on my board. 🙂

We hadn’t originally planned to snowboard in Bansko because we figured it would be too expensive, but as we drove there along the snow-capped mountains, I knew it would be a difficult urge to resist. When we actually arrived to the small ski-town and watched all the boarders and skiers heading to the lifts, it was like being a kid in a candy shop who wasn’t allowed to have any sweets.

The mountains in the background were calling our names.

Our second day there we headed to the rental shop to see what kind of chunk this would take out of our pockets. We had absolutely no gear so we knew the chunk would be significant. When we walked in, the sales rep asked what we needed. With a smile we said “Um, everything”, figuring we’d be lucky if a shop could rent the entire gamut of gear we needed – pants, gloves, helmets, boots, and snowboards. Without hesitation he pulled out his list of prices for every article required plus more. We were in business. The cost wasn’t as expensive as we thought but still more than we were hoping. We also had to consider how much lift tickets would cost in addition to all the gear. So we left the shop still debating what to do.

We almost went ice-skating but, when we found out how much it cost, decided to just take pictures of the rink instead.

That afternoon and evening the clouds gathered and the snow gods unleashed an auspicious flurry nixing any further debate. The decision was made. We were snowboarding. The following day we went back to the rental shop, collected our gear, then made our way to the lifts. The clouds that laid our red carpet of snow the day before, parted just in time for our day on the slopes. We had pristine powder on the mountain, clear blue skies, and a crisp temperature hovering around 32 degrees Fahrenheit; absolutely perfect conditions by every standard. We spent the entire day smiling and carving fresh marks into the mountainside.

Happy to be heading to the top. 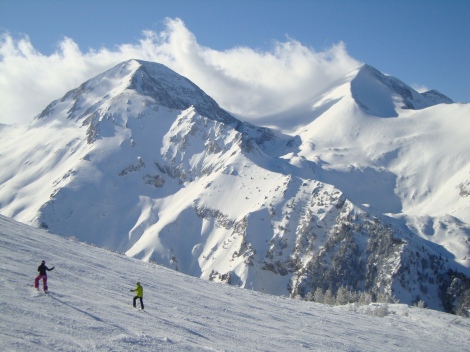 Our little ski-town is down there somewhere.

She came for the Bankso 2012 Alpine World Cup, but arrived a day too late. Instead, she carved the slopes just for fun. 🙂

Enjoying the view while we grabbed lunch and a beer.

After several runs, TB’s legs were getting tired so she decided to make her way down to the bottom. I took once last trip to the top before the lifts closed and jetted as fast as possible down the slopes, turning my nose and ears cherry red from the cold wind.

Doesn’t get much better than that. Plenty more of those days to come in the mecca of it all, Colorado. 🙂 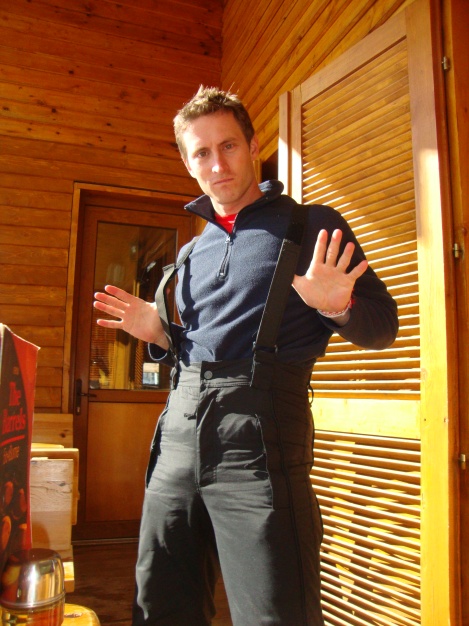 She Says:  We also did a pub crawl in Bansko.  We were quite impressed in ourselves for staying out after 11pm.  We only made it to 3 bars but nonetheless it was an accomplishment!  J even tried the Rakia (Bulgaria’s signature liquor).  He said it was pretty smooth and tasted like a mix of tequila and vodka.  Ugh..no thanks!

Getting the pub crawl started.