He Says: On our 4th day in Bali we took a taxi from Ubud, over the mountains and through the forest to Lovina Beach, right on the ocean. We found another hotel with lush gardens, a beautiful dark-blue tiled pool and, above all else, A/C. Actually, we had to haggle a bit for the A/C but we’re used to haggling by now. Somehow we’ve become A/C snobs since arriving to this part of the world. 🙂

Beer at the beach..we are getting too used to this 🙂

Our first priority in Lovina was to watch the RWC championship so we asked around looking for the closest pub showing the final match. Most of the locals really had no clue what we were talking about so we switched to Plan B – renting a scooter and driving around looking for the closest pub showing the match. This worked better as we quickly found a pub with a few Aussies, some French and a British couple sitting around the bar. We made friends with the British couple and listened to the French and Aussies heckle each other while we watched the All Blacks win their first RWC since the 80’s.

After the game we scooted our way back to the hotel but it turns out TB had a few too many and my driving was a little too erratic for her. My new favorite experience is her dry-heaving on the back of the scooter while we rode back home for the night. Thankfully, she was able to keep it all down until we got back. Sorry, babe, I had to put it in the blog. 🙂

She Says:  It wasn’t because I had too much to drink.  He likes to say that because it sounds more interesting.  Truth be told, I hadn’t been able to hold down anything for 3 days, food or adult beverage.  It’s okay babe- I forgive you for the tall tales.

He Says: The following day we explored Lovina a bit and found a hot spring pool with a nice restaurant for lunch. Nothing too exciting about the springs but trying to find them, getting a little lost then asking directions from the locals was fun.

That evening, we strolled down to the beach to find a guy named Smiley who offered to take us on his boat to see some dolphins. We found him with a big smile on his face (hence the name) and agreed to meet him first thing the following morning for our tour.

So we did. Smiley took us out on his longboat around 7am and we chased a pod of dolphins around the bay with about 40 other boats. We would troll around for a bit, see a pod of dolphins then gun it straight in their direction. With about 40 other boats doing the same thing it reminded me of what it was like to be riding a scooter on the road with the crazy locals weaving and swerving everywhere (please reference previous blog post). So we oohed and ahhed watching the dolphins swimming and jumping out of the water, took who knows how many photos then made our way back to the hotel.

Heading out to find the dolphins

The RWC Final, the hot springs and dolphin watching were all fun and good but it wasn’t the most exciting thing that happened in Lovina.

She Says:  Well babe I think that covers it.  You did a good job..  But I am pretty sure the most exciting thing that happened was the All Blacks winning the Rugby World Cup.   Although avid Rugby fans we are not- part of our trip and experience in NZ and with my family was Rugby.  We learned, watched and celebrated the All Blacks from the very first day we arrived there.  I guess we felt like we were going on this journey with them.  To have such a happy ending to the journey felt like a complete circle.

HAHA just kidding.  It was awesome and all but not the most exciting thing.  The most exciting thing that happened in Lovina Beach was our engagement!!  As J said earlier– that day we had went and watched the dolphins at sunrise which was an awesome experience.  The rest of the day was pretty laid back.  We cooled off in the amazing hotel pool, got lunch and had to return the scooter we had rented.  On the walk back from returning the scooter we stopped at a couple restaurants to check out their menus for dinner later.   At one of the restaurants we popped into, an Australian woman started chatting us up.  She had explained she was the owner of the hotel in which the restaurant belonged to.  She of course asked if we were engaged (We get this A LOT). I say no.  She then asks if we are already married.  I say no again.  So like a good Aussie woman she begins giving J a hard time about it and asks him what the hell is he waiting for.  She continues to ask how long we have been dating, could he see himself with anyone else, etc.  J begins to blush, fumble over his responses, stutter.  I am of course enjoying every single minute of this badgering.   She notices his embarrassment and lets up.  She apologizes and reassures me that he will do it when he is ready.  J being a good sport lets out a sigh of relief and replies to that suggestion with the word “exactly”.  Then proceeds to turn to me with a “don’t you give me a hard time about it either”  look.  I just smile, very content with the conversation that just occurred.

We walk on to our hotel, take another dip in the pool and get ready for dinner.  We end up going to a restaurant right next door to our own.   It is a cute little outdoor restaurant with not a soul in it but ourselves and the staff.  I didn’t think this was unusual.  Many of the restaurants we visit barely have any customers and we often wonder how they stay in business.  While waiting for our meal J says to me, “You know I love you, right”? I reply “yes”.  He then says, “You know I want to be with you forever, right”?  I reply “yes”.  At this point I begin to think he is trying to reassure me after the earlier conversation with the Aussie woman.  I think it is sweet that he feels bad about it and is being sympathetic to how I might feel about it.  Then he proceeds and says, “You know I want to marry you, right”?  I reply, “yeah I guess so”.  J looks at me and says, “will you then”?  I am completely confused at this point..  J starts to get up out of his seat.  I think he is just being silly, so my first words are ‘shut up”.  I honestly thought he was playing around.  He reaches in his pocket and has this huge grin on this face.  I still think he is just joking around so I tell him to stop and to shut up again.  Low and behold, J pulls a pink woven ring box out of his pocket and kneels down on one knee.  He says, “I am serious, will you marry me”?  I am not really sure what I said at this point but I am pretty sure I may have said shut up a few more times.  Obviously I was in shock.  You have to understand I had been waiting for this moment ever since my dad slipped and told me John had asked him for his permission to marry me about 6 months ago.  So this entire time of traveling I kept wondering when he would do it.  I watched for signs of peculiar behavior, romantic locations, nervousness–anything out of the ordinary.  I kept telling myself I would stop analyzing everything and it would just happen.  And that is exactly what happened.  I was not expecting it AT ALL!  He did good 🙂

I can honestly say I truly believe I am the happiest girl alive.  I have met someone who not only shares a similar belief and attitude towards life but someone whom I trust completely, supports me whole heartedly, and accepts me entirely just as I am.  I am glad I waited for him.  I am excited to share the rest of my life with him and see where it takes us.  This adventure has only just begun.  I love you babe!!  Thank you for making me the happiest girl alive! 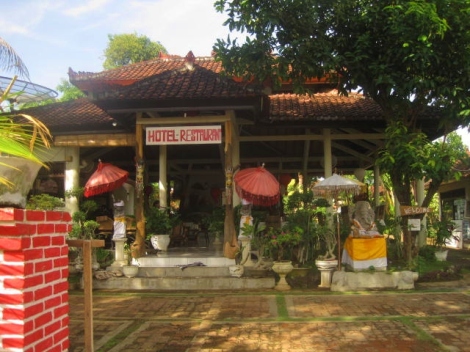 The restaurant where it all went down.

I’m so excited to enjoy the rest of our lives together. 🙂

2 responses to “Hop, skip and an unexpected proposal in Bali, Indonesia – Part 2 of 2”