He Says: After Clearwater and Tampa we made our way South and East right through the middle of the Everglades. I surprised TB with an airboat tour at Gator Park on our way to Miami. She had no idea and loved it! The tour could’ve lasted a little longer but it was a blast. We flew on the water of the Everglades and almost got eaten by gators. 🙂 We got back on track for Miami once we were done wrestling the gators. To be honest, I wasn’t too impressed with the city and I know TB felt the same way. Other than some good Cuban cuisine, beautiful weather and  beaches, I didn’t think Miami had too much to offer. We got the cheapest motel we could find and definitely regretted it as soon as we got to the room. TB was convinced there were fleas all over our bed and we discovered the phone didn’t work after some locals decided to pound on our door at 1:30 in the morning. I think next time we’ll spend the extra money and stay at a nicer place. Everything in life is a learning experience. 🙂 We left the motel first thing the next morning and headed for the next best thing…campgrounds. Played some catch, went swimming in the pool, walked by a lake and then ate our new favorite dinner, baked beans mixed with tuna and green beans on the side. Delicious. We had to get up at 5:30 the next morning so we went to bed as early as possible but the humidity wouldn’t allow it. We ended up tossing and turning for 4 or 5 hours in stickiness then, finally, the sun came up and we went to our trail run. I couldn’t actually run because of a knee injury (yeah yeah i know, i need to take my balls out of my purse) so I just walked the whole thing but it was still fun. TB ran and finished with a pretty good time. She got her shoes nice and muddy too after jumping in a creek that smelled like rotten eggs. Once we were worn out, dirty and wreaking of rotten eggs we headed for Disney World…. 🙂

She Says:Yes J did good with the airboat ride surprise. I had been talking about it the whole way through the everglades about how cool it would be to do one, not knowing he had already planned it. It’s the least he could do for making me stay in that flea infested hotel. At least the AC worked. I thought when we heard that banging on the door at 1am we were done for and going to get robbed and who knows what else. And when he picked up the phone to call the front desk and there was no dial tone, well that is when my mind starting racing and playing one of those horror movie scenarios. Young couple pull over after miles of driving to a cheap hotel. Things are under par but they say what the heck and call it a night. Then when they are fast asleep they hear weird noises which progressively get louder and harder to avoid so they reach for the phone which coincidentally doesn’t work — then they get murdered. Well we lived! Phew…that was a close one. Trail run was awesome!! I recommended to all. Somehow I ended up running about 2 miles further. I must have gotten off the trail at some point then back on it. It’s pretty easy to get lost on those things. Then we were off to Disney to stay in a very nice hotel. Yay! 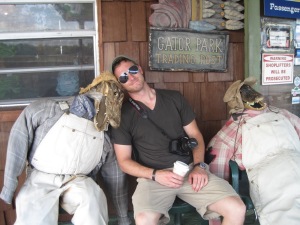 They told me this was a customary southern greeting. It wasn't on the lips 😉

Gator wrestlin' after our airboat tour in the Everglades.

Where all the magic happens at Coral Castle in Homestead, FL.

After our trail run through the woods in Miami.