He Says: We left wine country and drove through more windy roads and along the northern California coast. We finally made it to Eureka which was pretty unimpressive but we found a cheap hotel and settled for the night. The next day we booked it straight for Oregon and made it to Crater Lake NP….I don’t think words or pictures can do justice to how beautiful this was. It’s a volcano that destroyed itself and eventually filled with water from snow-melt over thousands of years. The crater is huge at almost 6 miles across at its largest point and 4 miles at its shortest. The water is deep blue, crystal clear and freezing….but not too cold for Mullah Gee and I to jump in. 🙂 We hiked from the rim edge to the water and found a rocky area we could jump in from. TB tested the water and decided it was a bit too cold but I strapped on my trunks and dove in. It took my breath away instantly and my appendages (all of them) started going numb within 15 seconds. Exhilarating is the only word I can think of to describe it. We warmed up, took a few more pictures then hiked back to the rim. We dodged swarms of mosquitoes and finally made it to our car and drove a few more hours to Eugene, OR.

We didn’t get there until almost after 10pm so not much happened for us in the land of the Ducks. We packed up the next morning and headed straight for Portland. I thought it was a great city but I don’t think TB was as taken with it as I was. She didn’t get the “vibe”. Don’t know if we could live there but it was a fun place to hang out. Good beer, good doughnuts (I don’t think you can find penis-shaped doughnuts anywhere else), quaint villages and free public transportation. TB and I enjoyed the sites for the day then packed it in for the night and got ready to see Rumanda in Tacoma the next day. 🙂

PS…trying to get as caught up on the blog as possible. Feels a little like that 4 letter word I find extremely offensive…..work. 🙂

She says:  Crater Lake was absolutely one of the most beautiful places we have visited.  The color of the water was unreal.  Apparently the water there is the most cleanest unfiltered water you can drink.  As we were hiking down we saw this stripe of yellow in the water, kind of looked like paint.  However, as we got down there we asked a ranger what it was and it was pine pollen!! Not sure how you would do there Uncle Jerry….but trust me it’s worth the sacrifice 😉

On our way we drove through a state park where we found a little lagoon.  We didn’t swim but we hiked down and watched a few young guys cliff jump.  The water was a beautiful turquoise color.  It was very tempting, but yet still too cold for my likes.

Well John was right.  I did like Portland, but it was still a little big for me.  There was traffic and it felt hard to navigate around.  I really do enjoy the smaller city vibe.  However we did go to Knob Hill which was pretty cool and more my style.  I actually really liked that area.  It was close to the city as well so it can go on the list, but probably not in my top 3.

Then we were off to Tacoma to see my wife and Rudy!  I was very excited to see her.  One day her and I will live in the same city.  It’s pretty much a must!

Hidden Lagoon we found along the drive 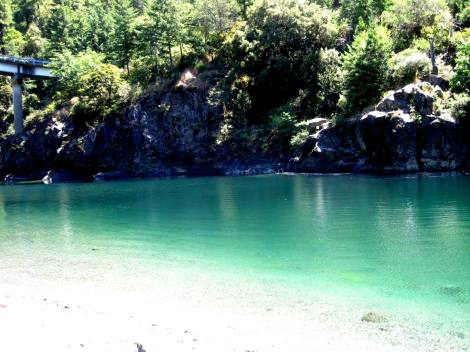 J jumping in the ICY cold water. I was not up for this one..maybe next time 🙂

That yellow in the water is the pine pollen!

A hiker enjoying the view

On the drive to Portland 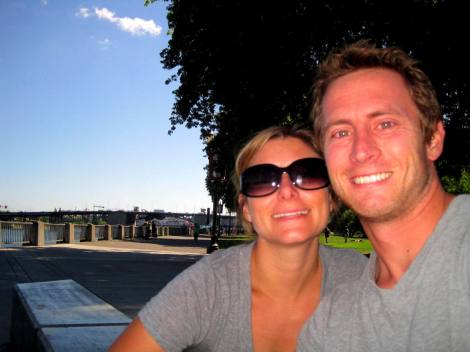 At the park in Portland

Portland is known for it's craft beers so of course we had to try some. It was pretty good!