She Says:  John and I have been dreading this post.  Not because we disliked NZ, but because we loved it and have soooo much to say about it.  First and foremost I would like to thank my family who made the past month an absolutely amazing time!  We could not have done half the things we were able to do without them–so THANK YOU all so very much, we love you!

I have thought a lot about how I could even begin to summarize my experience in NZ.  Many of the things we did are definitely worth writing about, however, on the plane ride leaving Auckland for Australia I sort of had a moment that I would like to share. It’s a bit more personal than what I have been writing, but all the same, it sums the trip quite perfectly. At least from my perspective. So here it goes…

On a plane from LA to Alaska I had asked for a blanket, because as many people know, its either very warm or very cold on a plane.  They can never seem to get the temperature right.  Upon requesting a blanket from the Stewardess I was given the response “I’m sorry ma’am we no longer provide blankets or pillows due to the outbreak of the avion flu.” “Great”, I thought. ” Now I get to sit here and freeze the next 5 hrs”.  So from that point on I told J this would never happen again and before we leave Alaska I am buying a blanket.  Just hours before flying out of Alaska I did just that and I bought a fantastic red blanket from Walmart for $14.

The blanket sort of became my clutch item and what I was known for around NZ.  I was never without this thing, and I was ridiculed and taunted for lugging this thing around EVERYWHERE I went.  Every family member knew of the “blanky”.  They would often ask where it was from time to time and always reminded me before leaving their house to make sure I had it.  I always did..

After boarding the plane yesterday, having said goodbye to my family at the airport, I made my way into my window seat on the plane.  I pulled out my blanket preparing for the 5 1/2 hour ride ahead of us.  I lifted the blanket up under my chin, put my nose into it and nuzzled in.  Upon doing this I had a very warm feeling of nostalgia.  In that blanket I smelled the warmth of my families homes we had stayed in, the many nights we had sat around the table or living room talking, drinking, sipping coffee and laughing, I smelled the fresh cool air from the south island mountains, spilled wine from many nights of drinking while staying at my Uncle Richard’s, drool from my cousin’s dogs (Ruby & Jade), remnants of freshly baked scones from my cousin Sharon’s kitchen, smell of rain from my cousin Avril’s mountain cottage, and scents of the sea water from my cousin’s partner’s seaside house in Kaikoura.  When I smelled that blanket, that is what I thought of, that is what I will miss, and it is what I will take with me.

Thank you Walmart.  That is the best $14 I will ever spend in your store 🙂

He Says: I bought a pair of $20 shoes from Walmart but when I put my nose in them the images I get are a little different. I think it’s best I don’t share those.

Unlike TB, I couldn’t think of a creative or interesting way to summarize everything we did in NZ over the course of a month. A lot of it was moving, some of it was awe-inspiring, most of it was once-in-a-lifetime but all of it was amazing. So I decided I shouldn’t cheapen our experience by not telling you as much of it as possible. Unfortunately for you, that means there’s a lot to read. If you don’t have the time or just don’t care, no worries…

— Unbeknownst to us, the day we arrived in Auckland was the first day of the 2011 Rugby World Cup. It came as no surprise to TB’s family that we, being Americans, had no clue the RWC even happened in the first place. Well we learned quickly. We arrived to TB’s cousin Sharon’s home where we received a crash course in rugby rules and quickly became avid fan’s of the All Blacks.

I don’t know enough adjectives to describe how big of a deal the RWC is so I’ll just say it’s a really big deal. People from all over the world filled every one of Auckland’s hotels but lucky for us we were staying with family. For every country that was participating in the RWC there were hundreds of flags being flown by their fans all over the streets all over the country. I can’t say that I’ve ever seen anything like it in the states.

Within a few hours of getting off the plane (jetlag be damned) we were packed like sardines on a train heading for downtown Auckland to enjoy the festivities.
We squeezed our way out of the train doors, made our way through streets littered with thousands of fans then finally made it to a family friend’s apartment.

When we got to the apartment the first thing we noticed was his balcony situated 3 floors high overlooking the viaduct. We soon found out this is where the wakas (traditional Maori war boats) would be “invading” the harbor as the first part of the opening ceremonies. With wine glasses in hand we watched the wakas row in and the invading tribes greet the many visitors. We were awestruck by the thousands of people standing shoulder to shoulder to just to get a glimpse or see it on a big screen.

It was an amazing experience and would’ve been enough to convince us that NZ is an amazing place. However, this wasn’t all they had in store for us. We met a few new friends while in the apartment who subsequently invited us to watch the first match and opening ceremony fireworks with them….from their yacht, in the harbor. Who are we to turn down such a generous offer? So we walked to their marina, hopped on their yacht then motored to a nice spot with a view of the city skyline. Once the fireworks started we were surprised (in a good way) to see the boats firing them were less than a hundred yards away. Without a doubt we felt the explosions but the most amazing part was watching as they literally rained down directly above us.

After the festivities ended  and the All Blacks completed their trouncing of Tonga, we meandered back to the train station to find the trains had shut down due to being overrun by the unanticipated number of people. We stumbled around some more laughing at fans from different countries jeering each other then, finally, found a taxi to drive us home. The rest of that night and the next day we talked about what an amazing time we had and thanked TB’s family. They assured us that we were special and they didn’t typically show their guests such a good time. 🙂

The whole night was amazing and unique but what really made it great was enjoying it with TB’s family. I think they may have felt luckier to be there than we did and that made us enjoy it all the more. For THEM, this was a once-in-a-lifetime experience. Imagine how we feel having enjoyed it with them.

There’s so much more to write but I chose to emphasize our first night in Auckland not because it was my favorite part. It’s hard to say any part was my favorite. I chose to emphasize it because it set the tone for the rest of our journey here. Either everything else wouldn’t live up to our first night or it would keep getting better. We weren’t disappointed.

On the bus heading to the RWC opening ceremonies. I actually took this picture in an attempt to find J on the train. We lost each other while trying to board.

The scene after deboarding the train.

View of the viaduct from the apt.

With the appropriate drink at hand 🙂 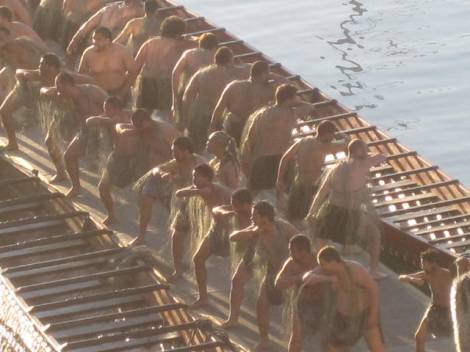 Performing the haka (their war dance)

Dad and J enjoying the view. 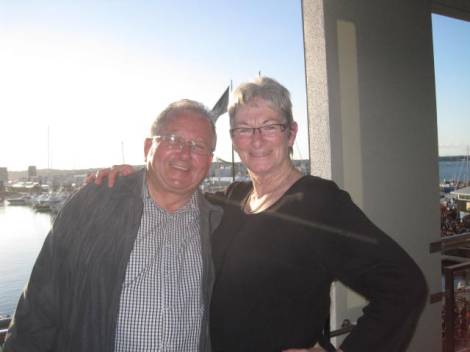 My family, Sharon and John enjoying it as well! 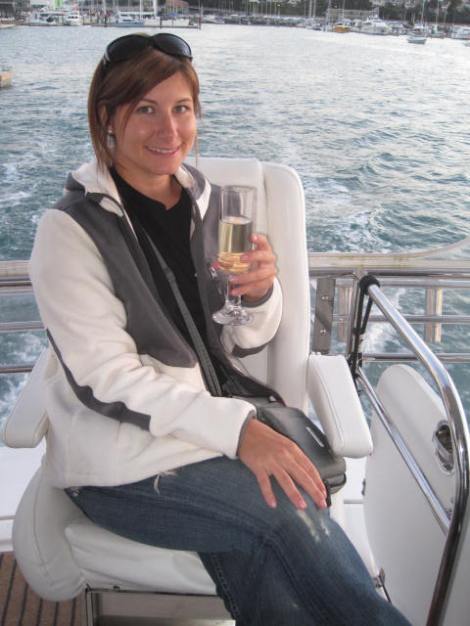 I think I could get used to this.

Sunset from the boat. 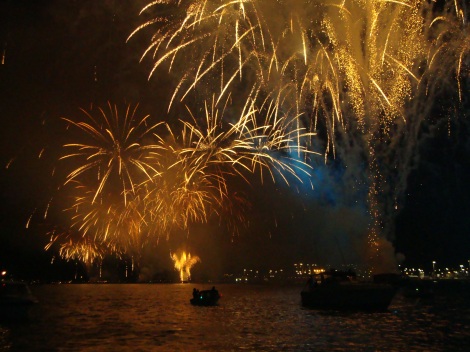 up close and personal for the fireworks.

2 responses to “New Zealand Part 1 – Go The Mighty All Blacks!”