He Says: We decided to give Pai it’s own separate post because it could be one of our favorite towns so far on our travels. From Chiang Mai we took another long, vomit-inducing drive through mountains to Pai. We were packed like sardines in a minibus for the entire ride but I think, by this point, that’s par for the course. Though we can’t complain too much. It only cost $5 per person.

We were dropped off in the town center and walked around until we found a local guesthouse with rooms for $13 per night. Definitely a good deal, especially considering this place actually had hot water as opposed to only lukewarm, and the wifi was good. That’s about all it takes to keep us happy anymore. 🙂

We originally planned on trekking while in Chiang Mai but, after the Karen Long-neck village, we decided to wait until Pai where it might be a little more authentic. We found a travel agency where a local guy named Pat assured us he would take us on a very good trek that wouldn’t be touristy at all. He was convincing so we booked a trip with him for two days later. That night we explored the town and immediately found that the hippie trail is still alive and well. Not only were there dozens of western hippies roaming the streets, but even some of the locals were hippies. The counter-culture seems to have thrived in this small laid back mountain town. Live music, dreadlocks, VW camper-vans, harem pants, tie-dye and the occasional street-side doobie smoker…all set in the midst of Buddhist temples. What more could you want in a hippie town? Thankfully, patchouli oil was the one hippie thing that doesn’t seem to have survived in Pai. 🙂

The next day we took a Thai cooking class, ate way too much food, relaxed a bit and then enjoyed a good acoustic set with some wine at a jazz bar. After that, we meandered through the night market along the main street where every evening the locals set up their tents and kiosks to sell food and crafts. I think every time we walked through the market I got a fresh waffle made with banana and Nutella. The smell of them is enough to suck in unsuspecting passersby. My new guilty pleasure. In fact, I look for them everywhere we go now and get disappointed every time we can’t find them. I made TB add them to the list of foods we’ll be making when we get back to the states. 🙂

Listening to some live music

We woke up bright and early the next morning and met up with Pat to go trekking. This is when you go on long hikes through the jungle/forest and stop at the local villages along the way. You can go for one day or a few days. We decided to be a little adventurous and do a two day trek so we could stay at a village for one night. We were glad that we waited until Pai  and lucky that we got Pat as our guide. It was an amazing trip and, I think, better than what most trekkers get to do. The actual hiking was good in itself and would have been worth the money. Pat’s motto was “If it’s not difficult, you won’t remember it.” We remember it. We climbed up steep hills then slipped and slid down their other sides; we forded streams and walked across rickety bamboo bridges (which Pat had to strengthen with palm strips); we clambered over craggy boulders almost twisting our ankles and walked along ridges that fell over 50 ft to more craggy boulders; water buffalo watched us carefully as we marched through their rice paddies; and we learned how to make a bamboo lighter. We were pretty sore and tired by the end but it was an awesome experience for everyone… except maybe our Swede companion who decided to hitch a ride rather than hike back to Pai the following day. 🙂

Ready for the trek 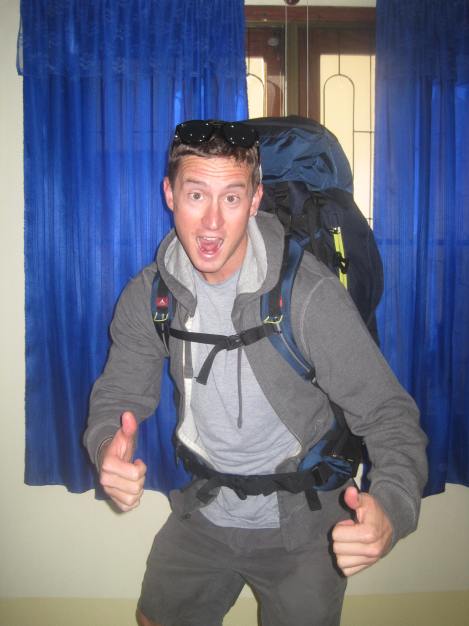 I'm not sure about this guy.. 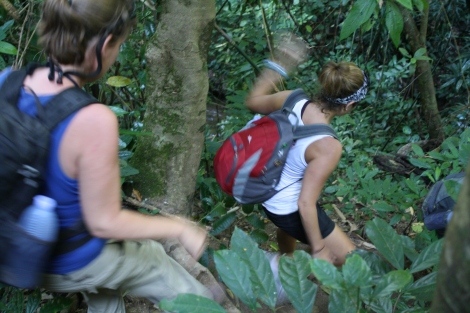 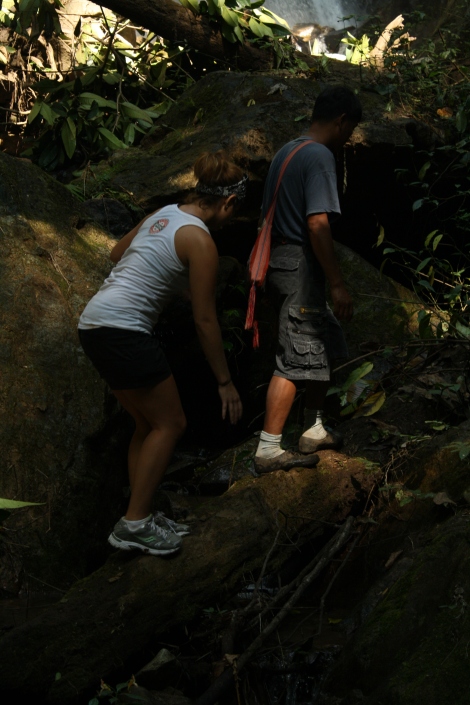 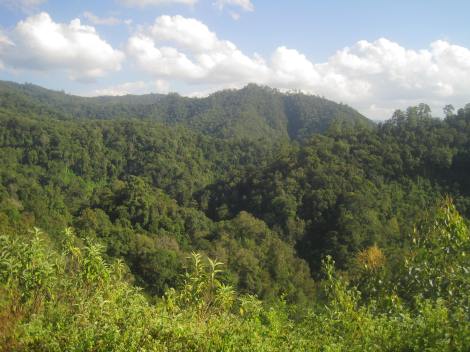 Our survival lesson for the day. Bamboo lighter.

Not sure what Pat was calling but it didn't work.

She Says:  I loved Pai!!  It was a small town with a great vibe!  There were several small cafes, bars, and boutiques set aside the two main roads of the town.  John and I meandered the two streets for a couple of days and were already trying to come up with ways of how we could move here 🙂  The night market was one of the best parts.  We have had very bad luck with street food up to this point and had almost given up on it.  Pai redeemed the street meat and we were well and jolly with the delights found on the street side. 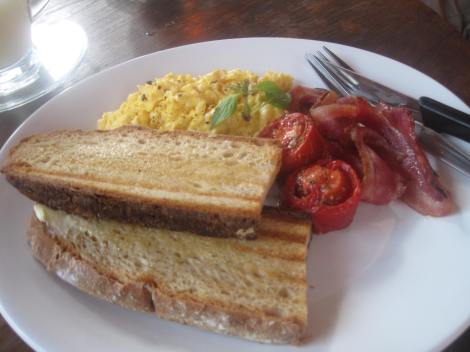 Unfortunately we did not have enough days to sample all the delicious food Pai had to offer. 😦

The cooking class was a lot of fun and informative.  We now know how to make curry, mango and sticky rice (YUM!), and pad thai to name a few.  One of the best parts was the trip into the town market.  Here our teacher taught us all about the food and how to tell if its good or ripe to buy and also what a few unknown foods were. (There were a lot of foods that we had no clue what they were).

Finally! Ready to chow down :p

The trek was by far our favorite part of Pai.  The drive to the starting point reminded me a lot of Afghanistan with all the dust.  We were sitting in the back of a pick up truck and by the time we got out we had a pretty good sheet of dust covering us from the unpaved roads.  Oh well I figured it would be pretty good natural sun block.  The trek was definitely more arduous than I had anticipated but it was good.  John and I have been slacking on working out so this was good for us. 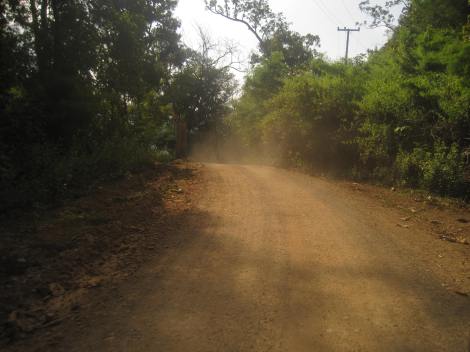 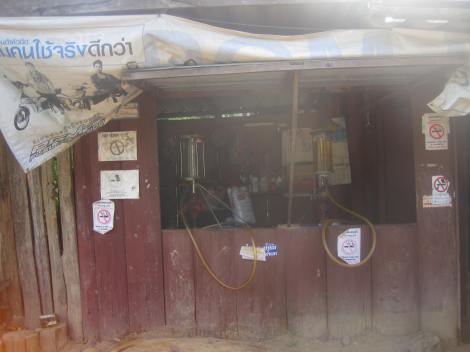 The best part of the trek for me was staying at the Lahu village.  We were apprehensive how the village would be considering our experience in Chiang Mai with the long neck village.  However, this was completely different.  After about 5 hrs of traversing through dense trees, waterfalls, and river crossings we arrived to a clearing at a hill top.  Down below was a small village with a dozen or so thatched houses, chickens, pigs, puppies, and little kids running around.  There was one dirt road through the village and a river stream at the end.  To me it almost felt like Utopia.  It was so simple, beautiful and serene and seemed like a perfect ending to the day’s journey.

We were greeted by the villagers and shown our accommodations for the night. After settling in we played with the kids for a bit and took their pictures. Some were a little shy around the camera but others were ready to be Thailand’s next top model. 🙂 We walked around the dirt paths of the village for a bit then checked out their machete-making business. According to Pat, these are the best quality machetes you can buy. We watched the local men pump air into a hearth then stick a piece of steel into the hot coals. After getting it to a bright hot glow they would pound away until finally it looked something like a machete. Another one of the villagers would then manually sharpen it with a stone until it was ready to slice through some bamboo and brush. The old-school way of doing things. 🙂 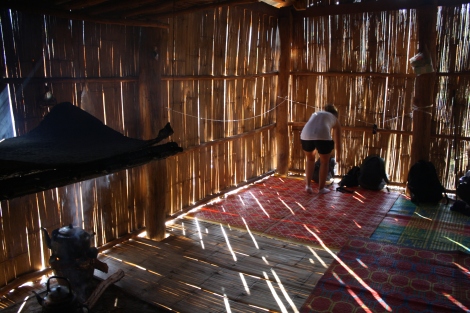 Our plush accommodations for the evening. 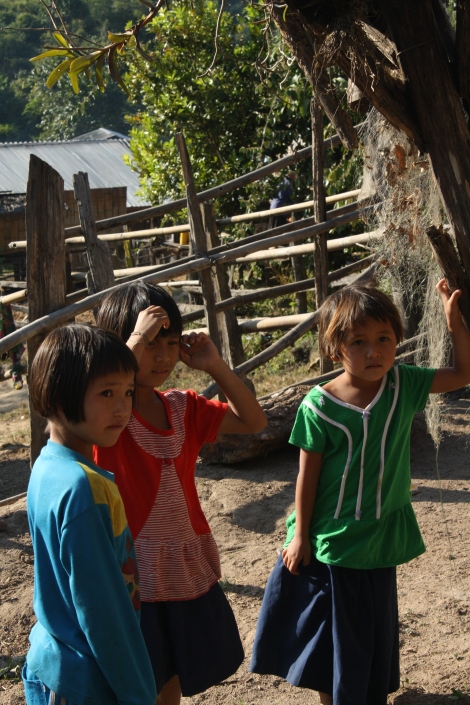 Soon it was time to get ready for dinner and we needed to wash up after the long day of hiking through the jungle. There’s no running water in the village so we used the next best thing. The river. We splashed the cold water on ourselves, rinsed our hair and scrubbed off the dirt. It’s amazing how much time slows down when things are so much simpler. 🙂

There was a stove in our bungalow where they cooked our dinner for the evening as well as our tea.  It kept the bungalow warm, but almost smoked us out.  There was no ventilation other than the door.  The food was delicious.  We all sat around a bamboo coffee table on the floor and ate our meal as we asked many questions about their lifestyle.  They didn’t speak English at all but Pat translated for us.  We also got to meet a really old man who was addicted to opium for more than 2o years.  He has been clean for about 10 now. How did he manage to quick after so many years of addiction? In his words he had a “strong heart”. 🙂  Thailand has been cracking down on the opium trade for awhile now.  Since most of the villages in this area are not Thai people the gov’t does not have to support them.  However, if they cooperate in the fight against opium they receive money from the government and are allowed to stay.  With Burma being only about 10km from the village — if they really wanted some opium it wouldn’t be too difficult to get.  It seems this village is pretty strict about opium use and most of the villagers stay away from it and tend to drink the rice whiskey which is very cheap to make.  They offered us some, but one smell of that was enough to make me feel a little nausea.  J of course braved it and had a couple of shots.

Washing up for dinner.

As usual, it’s the people you meet that are often the most interesting part of a place. This was definitely true in Pai and the Lahu village. It was a great day.  I am so glad J and I decided to do the trek.  The next day trekking was longer but other than the river crossings didn’t seem as difficult. We finally made it back to Pai in one piece in the evening. I got a massage, as usual, to ease my aching muscles and then we went out for our traditional post-hike drink.

The next day we packed up, picked up our laundry and waited for our “sleeper” bus that would take us to the Mekong River for our slow-boat ride into Laos.

To Laos we go!